Bio-identical hormones are a safe and effective way to combat certain symptoms associated with aging, particularly those related to menopause, andropause and bone loss. Dr. Passero will expertly craft a plan to meet your individual needs utilizing a treatment plan that delivers maximum effectiveness while respecting the natural aging process of our body and minimizing potential risk.

Introduction to Hormones:
Hormones serve as key regulators of cellular function for both men and women and play a critical role in our overall wellness. When hormones are out of balance the consequences on health can be disastrous. Mood, energy, weight regulation, sleep, mental focus, sexual function and bone health are just some of the areas of health that can be severely affected by hormone imbalances.

Millions of Americans suffer from hormone imbalances that negatively impact their health. Stress, toxicity, nutrient imbalances and aging are the most common factors that lead to disruptions in hormone balance. Working with the body using natural methods of treatment to restore balance to the hormonal system is an effective way at improving health and well being.

Bioidential Hormone Replacement Therapy (BHRT) uses hormones that are identical, on a molecular level, to the hormones naturally produced by your body. Although this approach to replacing hormones sounds very logical, many common hormone prescription medications use synthetic forms that are not native to the body. This can significantly increase the risk of unwanted and negative side effects. Using bio-identical hormones to address hormone imbalances respects the natural balance of the body and the elaborately designed endocrine system.

BHRT goes beyond just using molecularly identical hormones. It embodies an approach to hormonal health that emphasis each person’s individual needs. As a team, doctor and patient are able to totally customize the approach to balancing hormones based on many factors including family history, lab tests, symptom picture and a variety of other variables. This results in maximum benefit with minimum risk and respects the individuality of each person’s body.

What Are BioIdential Hormones:
Hormones are the body’s key cellular signalers. They control many aspects of our physiology and play a huge role in our day to day state of well being. Few other substances in our body can have such a significant impact on how we feel.

Bioidential hormone replacement therapy utilizes forms of hormones that are molecularly identical to what our body naturally produces. This novel approach to balancing hormones was largely ignored by conventional medicine for over 30 years due to the simple fact that bio-identical hormones cannot be patented (no natural substances can be patented) by drug companies and therefore there is little profit to be made from pharmaceutical sales. As a solution to this problem drug companies developed synthetic analogues to hormones that were unique in nature and proprietary and could therefore be patented and sales rights kept exclusive.

The prime example of this is Premarin and Provera, more commonly referred to as Prempro. Premarin is derived from the urine of a pregnant horse and contains 17 different types of estrogen, only two of which are ones naturally produced by the human body. Provera is a synthetic form of progesterone that can create serious side effects and risks. For 30 years drug companies worked to convince doctors that this was the best way to help women deal with the hormonal changes and unpleasant symptoms associated with menopause. This was the status quo until 2003 when the Women’s Health Initiative study was released which demonstrated serious side effects from the use of Premarin combined with Provera. Increases in risk for developing breast cancer, heart disease and stroke were among the most concerning side effects. This lead to a major backlash against using these hormonal medications and left many women suffering with no where to turn.

On the other hand, long term clinical trials using bio-identical hormones have demonstrated a greater safety profile than their synthetic counterparts. They have safely been used in Europe and the United States for over 50 years. In fact, the FDA has found bioidential topical progesterone to be so safe that it allows its sale over the counter with no prescription.

What Conditions Can be Treated with BioIdentical Hormones? 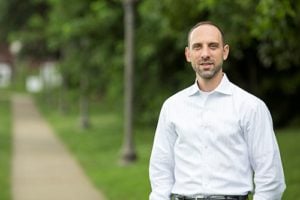 Dr. Passero is a licensed Naturopathic Doctor and graduated from one of only eight accredited Naturopathic Medical Schools in North America. His mission is to bring cutting edge natural and holistic therapies to the Washington DC metro area and to educate people on the value of naturopathic medicine across the country. His practice focuses on an individualized approach to medicine.  His goal is to help people uncover the answers as to why their body is in distress and find the solutions necessary to restore optimal health.

Dr. Passero completed four years of post-graduate naturopathic medical education at the National College of Naturopathic Medicine (NCNM) in Portland, Oregon after receiving a Bachelor’s Degree in Environmental Biology from the University of Colorado.

For this reason, certain services listed on this website are only available through his Washington DC office. Please call the main office for details.

Phone consultations, Google Hangouts and Skype will be billed in coordination with an in office visit.

Payment is due at the time of service. We accept cash, check, and credit card (MasterCard/Visa/AmEx). A late payment charge of 1 1⁄2 % per month (18% per annum) with a $5 minimum will be charged after 45 days. There is a $25 returned check fee.

There is no charge for brief questions that can be answered on the phone such as clarification of on-going therapy. However, if you are calling about a new health concern or need extended time, fees based on office visit rate schedule will apply (see above). If there is any question about this service, you are welcome to ask at the time of the call.

Kevin Passero N.D. holds a degree of Doctor of Naturopathic Medicine (ND) and is a licensed, board-certified Naturopathic Physician in the State of Oregon and Washington, DC. Maryland and Virginia do not currently offer licensing for naturopathic doctors (ND). Therefore, Dr. Passero is not able to accept insurance payment and does not provide billing statements for insurance reimbursement. [Superbills for a patient to submit on their own are available to our Washington, DC patients only.]

The scheduled time for your appointment has been reserved specifically for you. Except in emergency situations, if you miss or cancel a scheduled appointment without providing 24 hours notice, you will be charged for the full price of the missed appointment. Because we make every attempt to stay on schedule, if you are late for an appointment, you will only be seen for the remainder of your scheduled time.

         If you have any questions regarding these guidelines, please feel free to ask

*All fees subject to change without notice

We focus on strengthening the inherent ability of the body to achieve and maintain health.

Below is a partial list of services and conditions commonly addressed at Green Healing Wellness Center. Please feel free to contact us for more information or to see if your health might benefit from naturopathic care.

For this reason, certain services listed on this website are only available through his Washington DC office. Please call the main office for details.